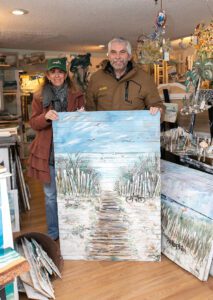 Mixed media artist Nita Shapiro feels more connected to the art she now creates, and more fulfilled by it, than anything she has done before. Using salvaged pieces of dune fencing and other pieces of wood such as beadboard and wooden planks as canvas, she paints beach scenes, creating texture and three-dimensional elements with objects found in nature.

“I do it for the process,” the practical part, she explained. She would spend endless busy hours in her home studio if she could.

Inspiration comes from everywhere, all the time, she says. “Everything I see.

“It’s boring,” she joked, meaning the inspiration is hard to ignore or cut off. “Don’t look, I can’t do this right now,” she tells herself as her plate is already full.

His decorative pieces, often on a large scale, are sought after by owners of luxury homes who want that certain something, locally sourced and singular. With his gallery, Art & Décor in Surf City, Shapiro’s mission is to help year-round and seasonal residents furnish their beach homes with art. Her shop features the work of several artists working in a range of styles.

“We know what they’re looking for,” she said. They want exceptional works of art. And they’d rather buy it on the island than pay to have it shipped from elsewhere. 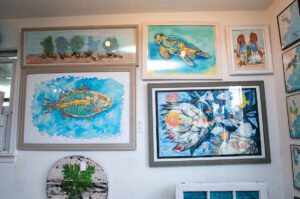 Shapiro’s artistic talent in early childhood led her to the Newark School of Industrial Arts, where she studied textiles and photography. Working in a variety of visual mediums, as a child she created backdrops for school productions and after college designed fabrics for sleepwear.

For 25 years she ran a business in North Jersey called Get the Picture, specializing in home accessories such as area rugs, runners, wall units and window treatments.

Her husband, Jeff Shapiro, is a vital support; Nita says she couldn’t run the Surf City Gallery without him. “He’s involved in every aspect of everything and is very creative,” she said. “We work well together, which is saying a lot after 49 years!

They moved to LBI and opened Art and Décor in Surf City about 15 years ago (originally in the space now occupied by SwellColors glass studio and gallery) and moved to the current location in a few blocks north (next to The Little Outfit children’s store) about seven years ago. They now live in Forked River.

Nita does business and relationships the old-fashioned way, with the honor system and a personal touch; it never cheated on her. She freely lends works of art from the gallery to “try out” the walls at home before buying. Custom work is welcome in sizes and colors to suit a given interior. Some patrons have built up their collection over the years. 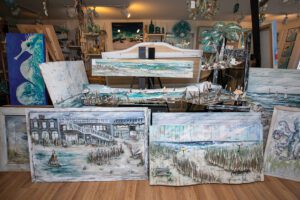 Valuing his place in the community, Shapiro wants the gallery to be an accessible and unassuming space. She described it as “a bit improvised” and “off the beaten track”, filled with quirky handicrafts and just enough clutter (her word) to keep the eye wandering from pottery and paintings to lazy Susans and suspended mobiles. The atmosphere is pressureless. Guests are encouraged to explore and engage in the creative process. Some items are weatherproof for outdoor display.

“There are lots of laughs and jokes,” she said.

Art is a bright spot, a happy place, she says. The trick is to “get people in the door and let them experience it.”

Come in and get addicted.

From March 15, Art and decoration will be open on weekends until the first week of June, then every day. Make-and-take classes will also begin in March, for art lovers aged 3 and up to learn watercolor, acrylic and resin casting techniques. To book an appointment or register for a class (they fill up fast!), call the store at 609-494-5038 or call Shapiro directly at 732-580-8129. Also keep an eye on the Facebook page as photos of new items are added regularly.