Exile collectiveThe online platform features designs from over 20 independent studios in Lebanon, made by artisans and craftspeople also based in the country.

Among the products on display in the Downtown Design section of Dubai Design Week 2021 were ashtrays and brass lamps from Youssef Bassil, sand-cast aluminum car sculptures by Antoine Guekjian and a modular globe-shaped night light by Laetitia Jbeily.

“Exil is a bit of an incubator, which is important because design in Lebanon is generally very expensive and luxurious,” co-founder Bassil told Dezeen.

“We wanted to break this mold, we wanted to invite designers ranging from students to very experienced designers like Marc Baroud.

Each designer was given a datasheet outlining the weight, cost, material and size parameters of the products so that the designs were not too expensive to ship when purchased from the Exil website.

This resulted in pieces in materials and designs not generally associated with Lebanon, including colorful tufted rugs designed by RADCAT.

“The rugs and coasters which are also made from rugs; tapestry in Lebanon never really looks like that,” Bassil said. “I think it was very interesting.”

“And metals and wood, very raw materials, which also show more of what’s coming to Lebanon. We have fantastic sand-cast aluminum.”

The pieces exhibited as part of Exil Collective were made by local artisans from different fields, many of whom enjoyed the challenge of working with materials in new ways.

“Some artisans were surprised, because they are used to making bigger pieces of furniture and unique pieces – they are not used to creating repeated pieces that have to be consistent,” Bassil said.

“As the economic crisis in Lebanon is very hard, people want to work, and on top of that, they were very excited to work on something different and see the prospect of something that could be produced at long term, “he added.

The criteria set for the designs also created a line for designers to follow, Bassil suggested. 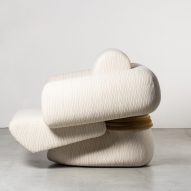 “It’s a bit seamless in its own way – it’s also very eclectic but there’s something that ties it together,” he said of the collection. “It is very simple and modest and you can feel the materials in the objects.”

Exil Collective hopes that the project, which has been named Architectural Digest Emerging Talent of the Year in the Middle East, will become a way for an international audience to discover Lebanese designers.

The flourishing design scene in Beirut, the capital of Lebanon, was severely affected by a devastating explosion that destroyed much of the city in August 2020. More than 60 international architectural firms have donated works by art and drawings to help raise funds for the reconstruction of the city.

Dubai Design Week took place from November 8 to 13, 2021 in Dubai. See Dezeen Events Guide for an up-to-date list of architecture and design events happening around the world.